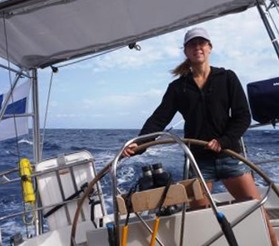 This is Helga... Helga's path to becoming an architect was rather roundabout. When she was 10 years old, she announced she wanted to be an architect. The die was cast, but there was more to life than study and architecture..

During her extended study for a bachelors degree of Building Engineering (1992-1999) she travelled the world looking for the exotic and remote, and worked at several architectural offices in the Netherlands and Australia. During and after her Masters' Degree in Architecture (2000-2006) at the prestigious Academy of Arts in Amsterdam, she worked as project architect for Paul de Ruiter in Amsterdam, currently one of the worlds' leaders in sustainable architecture.

In 2007 she established HELGATRAKSELarchitect in Amsterdam, specializing in sustainable architecture and interior architecture. Still, adventure lured, and in 2011 she set out with her husband to sail around the world. 'We wanted to try and live a self sufficient life and study exotic places. There is still so much opportunity to learn more. We managed to live over three years collecting rain water, powering our yacht with solar and wind energy and controlling our overall energy consumption. It can be done!'

After three years of sailing, it was time to settle down again and continue with her lasting passion, sustainable architecture. She settled this time in rural Finland where the unspoiled natural environment and harsh climate remain an everyday inspiration for her work.